If you are involved in an endeavor and you want it to be successful, you need to wrap your mind around the fact that it’s going to call for investment.

There are all sorts of forms this may take. Of course, the first thing most people will think of is a financial investment, and there are certainly instances where this is the case. But there is also the investment of time, of creative energy, and of other sorts of resources, some of which end up catching you by surprise.

Why would I be going on about this? Because I’m involved in an endeavor. The name of the endeavor is The Games And Writers Show.

This is a rapidly growing internet talk show that I co-host with my long-time friend, co-author, publisher and possible formerly conjoined twin, Craig A. Hart. Now, I have to stop right here and talk a little bit about Mr. Hart.

Craig is a pretty amazing guy, and if anyone tells him I said that I will deny it. But consider this: In what started out as a streaming show on the Twitch gamer’s platform, with the intention of getting together with some writer pals and playing videos games, (which was already something I was all-in for), it’s evolved into a semi-legitimate, regularly scheduled program which has featured interviews with, among others, a Guinness Book world record holder, a filmmaker, and the daughter of the man who defined the Western genre, along with a host of up and coming as well as established writers and editors. 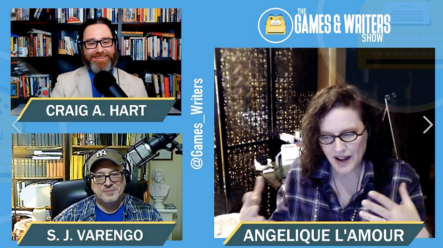 In addition to the interviews, he and I record segments which almost always devolve into us laughing hysterically at our own nonsense, (we are each other’s #1 fan). Recently I’ve begun insinuating myself into the interviews as well, most recently in our fantastic conversation with Angelique L’Amour, daughter of the one and only Louis L’Amour, whose paperback masterpieces graced the hands of guys at my high school who probably had never read a book on purpose until that point in their lives.

Craig has gone out and contacted these people, somehow convincing them that coming on our show isn’t the worse decisions they could potentially make. He’s gotten us some sponsorships, he’s purchased software, gotten a nifty opening graphic produced and has upgraded his hardware to produce the most professional product ever made by amateurs.  And in his latest coup, he got us onto Amazon Prime Video. (You can also watch on YouTube. In fact, because it takes a lot more work getting the episodes ready for Prime, there is currently a lot more to see there.)

In other words, my buddy’s pretty cool and the show is rapidly becoming a thing.

So it’s clear to me as co-star, (that’s what they call me on Amazon Prime, not my words), I felt it was time for me to increase my investment in the program.

First, there was a small financial investment in equipment. One of the things about broadcasting to the internet is the quality of the camera really matters. If you’d like to see this played out graphically, go watch the very first episode of the show, which featured Craig interviewing yours truly (prior to losing his mind and inviting me to be a permanent part of the show), then check the quality in the segments we’ve done together prior to today. The good news is thanks to Craig’s guidance, some excellent timing, and my Prime membership, I purchased a much-improved camera on Thursday, which arrived today and is currently producing top-notch images such as the one above. We’ll be recording our first segments using it this week, so I expect all of you to watch every episode and guess which one uses the new cam.

The majority of my investment, however, will be of my talent, and in that regard, I intend to make a major deposit in the TGAWS account. I want to give back as much as I’ve been given, and I want it to show in the show.

So if you’re not yet watching, you should be. If you go to YouTube, you can even join the other 1000+ subscribers to the show and receive reminders of new episodes. If you have been watching… don’t stop now! It’s just going to keep getting better!