It has been a rough patch of days. Some of the worst. I’m not freaking kidding! But at some point today, after clawing up a very steep hill for… for what, two days? Three? A billion? After that climb, I saw a distant shimmer. I’m a fool to follow it’s empty glistening, but I believe I saw hope in the distance.

And that’s all I’m saying about that.

Right now I’m looking at small glass, empty save for a wedge of lime that has been thoroughly assaulted. It was good, and it looked and smelled and tasted exactly like a gin and tonic. But of course, that couldn’t be, as writers don’t drink.

I’m also listening to George Benson’s 1974 album Bad Benson. This album was, for me at about age 16, (so two years after its release), something of a holy grail. I had been looking for it all over Syracuse, to absolutely no avail. But in late in 1976 I had the good fortune to be able to travel with my high school art history class, to Washington to see the exhibition of the treasures of King Tut.

The trip is memorable for three reasons.

The first reason is actually a couple of reasons rolled into one experience, and that was the exhibit itself. It was unlike anything I’d ever experienced even before I saw the first item in the showing. That’s because the line to get in literally stretched around the block from the entrance of the National Gallery. Wikipedia reports that during the time the artifacts were in D.C., over 836,000 people passed through the exhibit.

I’m pretty sure most of them came the same day I did. 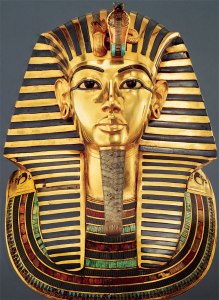 But the second part of the first memorable thing was what I saw once I did get into the exhibit. This is a bit cliché, but as remarkable as the treasures have looked to you online or on television or in the glossy pages of Nat Geo, seeing them right in front of your eyes, so close you could touch them if you didn’t mind dying in the attempt, well that was something else again. There was, of course, the funeral mask, which has of late fallen under a cloud of controversy as research indicates the mask may have been made for someone other than Tutankhamun. Of course, I knew nothing of this as I was looking at it, but I suspect that had I heard this talk even then, it wouldn’t have mattered that much to me.

There were many other items, far less famous and so rarely seen that to me many of these were more spectacular than the iconic mask. Of course, no photography was allowed, so I have no proof that this story is true (except maybe the shared memory of my classmates, but I digress).

If you doubt that story, you’ll really bark at this one.

Mr. Nicholas Todisco, the first great educator I ever encountered.

Not too long after we checked in, I ventured into the room of two of my friends. These were not the guys I was rooming with, and my venturing there must have caught the attention of my teacher, chaperone, friend, and mentor (well after I graduated from high school), the late Mr. Nicholas Todisco, because after I’d been in the bathroom with the other two guys, possibly blowing smoke from a shared marijuana cigarette or “reefer” as you kids call them these days, there occurred an event.

We thought we were pretty slick, as the bathroom as at the extreme rear of the hotel room, so should anyone come in there was time to slam the door shut and scream, “Don’t look at me, I’m hideous,” or something to that effect. I think I even might have suggested some completely made up science about the cool November air causing the smoke to descend toward the street, some six stories below the window. There was no way there could be any smell in the room. Because, you know, science.

So the smoke blowing may or may not have recently ended and the asinine laughter and the squinting of the eyes commenced. So too did a knock on the door of the room. We three looked at one another as though we were John Wilkes Booth and his two brothers, also John Wilkes Booths, and someone outside just yelled: “Boy, I have never seen so many pissed-off Yanks in my entire life.” We knew it was Nick, and we knew we were probably in trouble. Maybe he would even kill us. There were lots of waterfronts where chum could be tossed out and quickly rendered not even a memory. (Okay, maybe that was just me. I may or may not have been stoopid high.)

This is not actually a picture of me. This schmo did in back in 1935, but… samesies.

We decided that the only real problem we had was that I was there. Considering it was not my room. It didn’t really occur to us, or to me anyway, that this in itself probably wasn’t particularly problematic. But just in case that sticky, stanky skunk smell was really hovering in the hotel room and it wasn’t, as I was wishfully trying to convince myself, just “stuck in my nose,” well then my being there might be construed as indicative of shenanigans. So I took action by immediately leaping out of the sixth story bathroom window into the aforementioned cool November night (which did not a damn thing to help push away the kush smell, thank you very much), and hanging by one hand from the window sill, onto which one of my friends carefully lowered the window, leaving just a crack to prevent the crippling of the hand that was my lifeline.

I was hanging by the arm on which I wore my wristwatch, and as I couldn’t really move to where I could get a better look at it, so I do not know precisely how long I hung above the busy D.C. street, but I’m relatively sure it was at least a week. Maybe less, I don’t know. It felt like a week. I could hear muffled conversation through the nearly closed window, and I probably don’t need to tell you that I could tell it was, in fact, Nick that had come to call.

For reasons that I cannot tell you to this day, we were not busted, either by the keen, trained eye of a long-time teacher noticing the window wasn’t quite closed, thereby discovering me via the blood-curdling scream as my metacarpals were pulverized and pulling me back in, or by me losing my grip on the sill and becoming a headline on the eleven o’clock news. In fact, Mr. T, as we pretty much always called him, did a quick visual scan of the room, apparently not actually even coming through the doorway. I was safely retrieved and the laughing and the squinting recommenced.

Later as we sat at dinner Nick made a point of looking closely at our eyes, and when he saw the three of us sitting strategically apart from one another, but still with matching sets of glowing soul-windows, he gave me a knowing nod and maybe even a trace of a begruged smile.

Later that night we got to take a walk around and Nick led us onto the campus of Georgetown University, and it was there that the third memorable moment occurred.

Now I suppose that most people when given the opportunity to tour an esteemed center for higher learning would be impressed by his surroundings, perhaps somehow expecting he might magically acquire some of that learning just by being there. By uttering some words that would seem like gibberish to the muggles around me, or maybe by science through that process named after the Osmond brothers. (I may have digressed once again, just a tidge.)

I didn’t give a crap about any of that. I wanted to find a record store.

And I did. I entered with high hopes. There was a little underground-ish record store back in Syracuse on University Hill, and I found many great prizes there. But I never found a copy of Bad Benson, and I am not exaggerating when I tell you that is what I walked in this Georgetown joint looking for.

Like any platter purveyor worth their salt, this place was well labeled so even an outsider like me could quickly size the place up and head in the right direction. I saw a sign that said “Jazz,” and under it a bin of vinyl. The rows of albums were divided by artist, and even with my public education I was able to sound out the letters that spelled “George Benson,” and as I began to flip through the records I was immediately rewarded as the third or fourth “flipee” was none other than a brand-spanking-new copy of the holy grail itself. Which I immediately bought before it evaporated into a mist or something.

Now of the three events, you’d think this would be the least memorable, but in my mental hierarchy is sits firmly in the #1 spot. Because the exhibit was a once in a lifetime experience, but after forty-plus years the details are no longer crisp in my mind. And hanging from a hotel window and living to not tell much of anyone about it until now, well you’d think that might even be considered a strong contender for the top slot. But no. After a few days the abrasions to my armpit, scraped right through the tee shirt I was stupidly wearing, began to stop hurting, and since we three promised never to speak a word of the experience, (an agreement unofficially endorsed by Mr. Nicholas Todisco), it too gradually became far less in the forefront of my thoughts.

But Bad Benson has been with me continuously for 42 years. First that Georgetown-obtained vinyl, eventually replaced by a compact disc, (don’t worry kids, it’s just another obsolete form of music storage, like these “records” you keep hearing me mention.)

Oh, and an aside to all those people who say that owning music is the old thing now that you can hear anything you want on the services, I’d just like to say “Ha!” Because Bad Benson is not among the albums included on Apple Music. But I have a freaking CD! And what looks and smells and tastes exactly like a second gin and tonic. And that might have had something important to do with this post getting written at all. But that couldn’t be, because we previously established the fact that writers do not drink.