I didn’t anticipate writing this. Certainly not tonight/this early morning, and probably not at all.

I’ve been working on my new book, The Count of Carolina, for a while now. I’d have to open the file and check it’s original creation date to tell you exactly how long, and I’m feeling rather lazy. It is 2:15 AM as I write this, after all.

I started on it April 25, so I’ve been working for almost two months on it. And it’s been rough going.

But do not despair. This is not one of those whining writer posts. “Oh, I have writer’s block! Oh, I can’t decide if I should outline my book or write by the seat of my britches. Oh, waaaah!” Nope, won’t be doing that.

For one thing, I’m sure I already have. At some point in the past, I’m sure I wrote an “Oh, poor me,” post and I’m not keen to do another one.

Secondly, the reason things were going as badly as they were had more to do with hardware than any internal malfunction. My PC, on which I prefer to write, was down and out for several days. I got it back to running well enough to make writing, if not pleasant, certainly less of a nightmare. (Yay me.)

Prior to that, there were a string of days during which life trumped writing, and I found myself running errands and cleaning house. All of which was good, but none of which was getting any work done.

But the PC coming back to life meant that there was nothing physically preventing me from writing if I put my mind to it.  So why did almost a full day go by without me getting anything done?

This is not me, nor is it my look of determination. No, mine’s a lot fiercer.

That’s a good question and it deserves an honest answer. The real problem, the root problem was that I’d reached a tricky spot in the story and wasn’t sure how to resolve it. Now that is a genuine writer’s dilemma.  That’s not something of which I feel as though I need to be ashamed. It’s part of the gig and its one of the parts in which a decent writer can flex his/her muscles a bit.

I suppose it’s significant that when a writer is interviewed, one of the questions is always, “How do you handle writer’s block?” I know I’ve been asked the question.

My answer then was probably, “Just sit at the computer and move your fingers over the keyboard. Something is bound to show up.” Clever, yes?

But I don’t really feel like what hung me up is the same thing as writer’s block. I wasn’t completely crippled, with no idea what to even begin writing about. I have been before, but this is not the same. 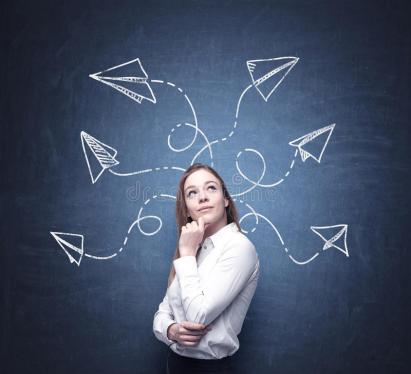 Also not me. The paper planes, however, represent the many directions a story can turn. So that’s relevant.

No, this was a case of deciding how to handle a difficult backstory reveal. It was a matter of choosing the proper direction in which to turn. This is not broad-sweeping (and essentially meaningless) philosophy. This is craft.

I think of what happened as a good problem to have because in order to have had to wade through the multiple possibilities I had to have written something sufficiently deep in its development to put me into a position where it was necessary to find not only a good direction but the best direction. Which, of course, raises the question, “How do you know which is the best option?”

For me, it was a matter of asking some more questions. Does the direction I’m choosing leave me the most options as I progress? Does it help the characters both develop and operate in the situation? Will it lead to clarity, not only of what’s yet to come but of everything that’s come thus far? Does it answer more questions, or does it raise more questions? (Either might be correct.)

Ultimately the choice I made blasted open the floodgates. I’ve been writing pretty much non-stop for a few days now, and it is vastly superior to the alternative which is delaying indefinitely.

But as is so eloquently state by Canadian power-trio Rush, “If you chose not to decide, you still have made a choice.”

So get ready for the ultra-rare advice to those writers who find themselves crippled by this situation:

If you wade through a slogging ton of options and do not pick the truest one, you’ve wasted your time.

And I don’t know about you, but I don’t have a lot of time that I can afford to fritter away on weakness and indecision.