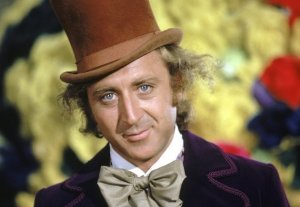 I gave this blog entry a title which many people will recognize immediately as a quote from one of the great philosophers of our time, Mr. Willy Wonka. I did that because I’m talking about fixing things, about making them right.

When I write a book, before even my advance readers get their hands on it, it’s been proofread by myself numerous time, then professionally edited, then re-read by me, then proofed by the publisher. In spite of that, mistakes bull through the process and end up appearing in the finished product.

This is as true with TBoB as with everything else I’ve ever written. It’s just an inevitability.

The first of these is my local writers’ group. Every Tuesday a group of between 6 and 10 people from the general vicinity get together at the Baldwinsville Public Library and read from their current work in progress. They’ve heard every chapter of The Beauty of Bucharest and were among the first to let me know that I might be on the right track with this one. The evidence would suggest they were correct.

Unfortunately, in order to allow everyone time to share, it took me longer to finish reading the book than it did to publish it, so the final four chapters were presented subsequent to its release. It was these folks who caught my three errors.

The second thing I have going for me is that with an independent publisher and with the technology now available I don’t have to wait until a large run of books is sold before I can release a corrected version. The ebooks are almost seamless, as the blurps can be taken out and the version replaced instantly. With the paperback edition, it takes a little longer, but not much more than 24 hours.

Now I’m not going to tell you what the mistakes were. They were relatively minor but absolutely annoying. And they’re gone now. But what a world we live in! With little more effort than it took the grand chocolatier to utter the words “Strike that… reverse it,” my problems are solved.

Which brings us to the NEWS section of this post. On Tuesday I began writing the followup to TBoB, which will be called The Count of Carolina, a title which one reader/friend informed me made him hungry for both a Monte Cristo sandwich and some Carolina barbequed pulled pork. (I think his mind might have been in dinner mode when he commented).

I can’t tell you a lot about it yet, but I will dangle these tidbits: it will deal in detail with Nicole’s backstory and it will introduce a villain as evil as any I’ve conceived. Plus lots of good Dan and Nicole stuff, which most readers generally felt was a high point of the first novel.

So I guess you need to stay tuned…

Or better still, join my mailing list and get the skinny about breaking news sooner than anyone on the planet. [Ed. note: the author’s wife usually knows stuff even before the newsletter subscribers, but you definitely be the second to know.]

Did I hear you say you haven’t purchased your copy of The Beauty of Bucharest yet? Too bad. The introductory price for the Kindle edition has come and gone, but it’s still a steal at $2.99, and of course, if you like to hold a book in your hands, the paperback version is still only $10.00 – also a bargain. Follow the links!