Since my first post during my all-expense-paid vacation to Ireland… AUGH there goes that autocorrect again! It was supposed to say “grueling grind of non-stop research with no fun and certainly no chasing after pretty girls or pub crawling I can assure you.” I’m beginning to think Craig has tampered with my keyboard.

Nonetheless, now that the holidays are past I felt it was important that I do a few of the essential things one does when visiting this beautiful country. The first of these was “kissing the Blarney Stone.”

The Blarney Stone is located at Blarney Castle. I know, shocking revelation, right? Blarney Castle is near Cork, which is about 236.2 km (or 163.5 miles in non-freaky-deaky metric) from Dublin. I felt this was an extremely long way to walk, (although I regularly pledge to walk the 885 miles from Syracuse to Iowa City every time Craig does a book signing, a pledge I have proudly not yet kept even a single time). There are plenty of ways to get from Dubs to Cork via the M7 and M8 highways, and after careful consideration, I felt the best of these would be to steal a car. So after yet another all-night session of pub research, I found a lovely unlocked vehicle and plied my hotwiring skills, learned from years of watching The Dukes of Hazard on TV.

When you arrive on the site you are greeted by this sign: 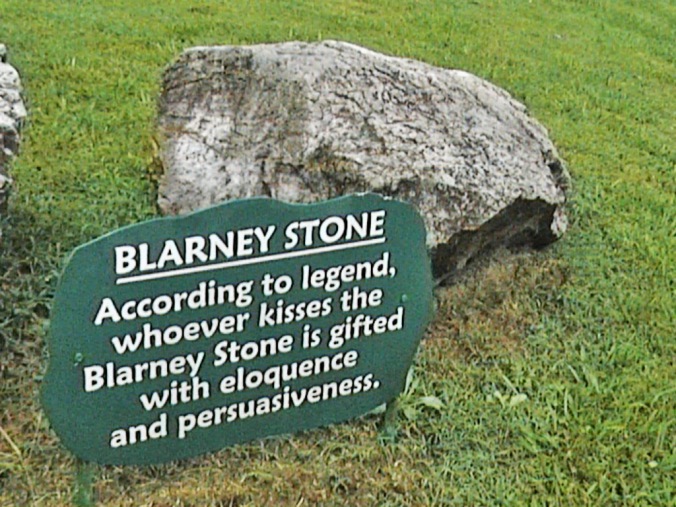 I saw that and thought, “Eloquence and persuasiveness? That’s perfect for me!” After all, what writer doesn’t want to be eloquent? And once a book is written, what writer does not want to persuade millions of people to buy it? Then I thought, “If you get eloquence and persuasiveness for kissing the Blarney Stone, what happens if you get to second base with it?”

Anyway, what this sign doesn’t tell you is that the Blarney Stone is built into the battlements of the castle, way the hell up in the air. Upon learning this I questioned whether or not I still wanted to make untoward advances toward a rock, but before I could chicken out and bail I was swept along in a crowd of other potential rock molesters and soon found myself way further up from the ground than I cared to be.

Because there were so many other people, it turns out that I didn’t really have time to develop a deep, meaningful relationship with this inanimate object. It also turns out that the actual act of kissing the stone is not the least bit comfortable or pleasant. Doing it looks like this. 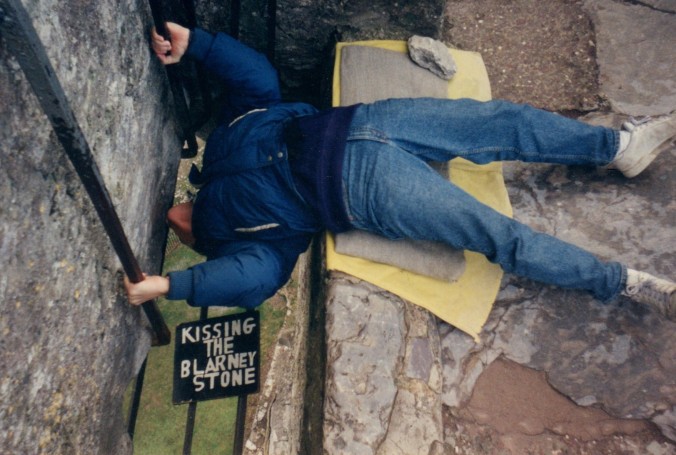 I would ask the reader to note the open space below this stone-lover’s upper body. That is a very long drop to the ground. Also, I have a bad back, and the required position for kissing the Blarney Stone would have sent me into spasms that I did not relish the thought of. So, in the end, I decided to keep my relationship with the Stone purely platonic. We shook hands, and I headed back to Dublin.

I wisely abandoned the stolen vehicle on the outskirts of town and walked [ed. note: read “stumbled”] to Grafton Street to see the world-famous statue of Molly Malone. Upon arriving I was informed that the statue was moved to Suffolk Street in 2014. Nice of them to let me know. But, as I was on an important research mission, it allowed me to visit several more pubs before arriving at the statue.

For those of you who don’t know, Molly Malone is a mythical fish-monger, who was immortalized in song back in the 1800’s. Here is the opening of that song:

In Dublin’s fair city,
Where the girls are so pretty,
I first set my eyes on sweet Molly Malone,
As she wheeled her wheel-barrow,
Through streets broad and narrow,
Crying, “Cockles and mussels, alive, alive, oh!”

In my humble opinion, this would have been a lousy thing to do for a living. But times were tough, as evidenced by the third verse, which goes:

She died of a fever,
And no one could save her,
And that was the end of sweet Molly Malone.
But her ghost wheels her barrow,
Through streets broad and narrow,
Crying, “Cockles and mussels, alive, alive, oh!”

Obviously, healthcare then wasn’t what it is now. At any rate, having heard the song, I began to question whether or not I even wanted to see the statue. Would it smell like fish? Would the fever have turned Molly into an ugly hag of a girl? And screw ghosts in general!

But the other bar patrons assured me that going to see her and actually touching the statue was one of the Dublin essentials, so I relented. When I arrived on Suffolk Street, this is what I saw:

Needless to say, things got out of hand quickly. You might notice that the metal in the area of her prominent lady places is a little shinier than the statue overall. That’s because this is the part that everyone touches. The folks in Dublin are used to this, but they were not prepared for the level of ardor I brought to the task. Apparently screaming, “What a rack!” at the top of one’s lungs followed by climbing into the wheelbarrow and offering one’s undying love is frowned upon.

So, I’m am sad to report that this will be the final Dublin dispatch, as the powers that be have asked me to leave the country. I’m filing this post from a dinghy that was set adrift in Dublin harbor, and am now several miles out to sea. Furthermore, I was asked to wear the outfit you see to the right, which, I might add, is making the act of typing a tad bit difficult. Apparently, they don’t care. Also, they were able to connect me with the stolen vehicle, probably due to my DNA being all over the empty bottles of Guinness that were strewed about the interior, so there’s probably a small bill coming for something called “restitution.” (I have to admit that I didn’t really have time to learn all of the quaint Irish idioms, but I’m sure Craig will have no problem writing the check, which needs to be made out for “€1 million.” I’m pretty sure euros are like play money, so it can’t be that much in real dollars, can it?)

Well, the waves are getting pretty choppy, and I noticed that this boat is leaking pretty badly, so I should probably sign off and see what I can do about being rescued. Oh, look, there’s another boat, filled with what looks like the fellows from that movie “Captain Phillips.” I’m sure everything will be just fin…

2 thoughts on “Dublin Dispatch #5 – The Essentials”