I don’t use a lot of horse racing lingo in my day-to-day speech. I just never developed the depth of love and dedication that the Sport of Kings requires of its devotees, and as such only those terms and clichés most fully integrated into the English language, (or at least the bastardized version we Yanks insist upon using), have found their way into my lexicon. 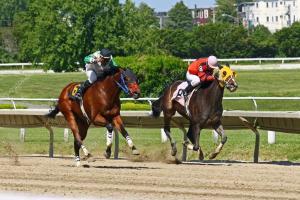 And they’re in the stretch!

Probably the term that get the most play with me is “in the stretch,” which technically refers to the point in a horse race when the animals have rounded the final turn and are heading down the straight portion of the course which leads to the finish line.

In the stretch is where you want to be when the kitchen looks like this!

I catch myself saying this all the time, particularly when I’m nearing the end of a particularly odious task. This almost always means some area of housework, such as a sink bulging with dirty dishes or a mountain of foul-smelling laundry, (yes being a full-time writer carries with it these glamorous side-jobs!) As soon as I’m aware that the chore is nearing completion the thought will pop into my head, unbidden, “Hey, I’m in the stretch!”

I use the term in writing as well, for all sorts of accomplishments, large and small. When I’ve put all the ideas and action into a chapter that I intended, and all that remains is to tie things up, close off the section and set up the next, I think about being in the stretch. When the book itself has reached its climax and the story is resolved, and all that remains is to gracefully close the book out, perhaps with a bone-chilling cliff-hanger (oops, did I just drop a hint?) I naturally think, “Halleluyer, I’m in the stretch.”

Being an indie author, there is another dimension in which being in the stretch is particularly satisfying, and that of course, it when I’m nearing publication.

I’ve written more than once that all the parts of getting a book into someone’s hands after actually writing it are a lot less fun for me than the act of creation. I suppose that’s not that tough a nut for my analyst to crack. I grew up dreaming of being an author, not an editor, or cover designer, or publisher, or marketing whiz… the list of jobs involved may not be endless, but it’s a lot longer than you’d think, if you thought about such things.

Having decided to go the indie route, however, all that comes with the gig and many pairs of big-boy pants need to be pulled up repeatedly, from the point at which I type “Chapter One” to the point at which you wait by the mailbox for my latest book to arrive.

And I’ve said all that so that I can say this: Many Hidden Rooms is in the stretch.

Not much fun, but it gave me a little editing boost!

Thanks to an unexpected night of insomnia, I crawled out of bed at 3:15 am on Sunday, May 28, 2017, and edited the final four chapters. Then, before crawling back into bed in a desperate attempt to grab a few z’s before Kim’s alarm went off at 6:30, meaning I needed to pull it together and drive her to work in an hour, I synthesized the PDF file which represents the finished interior of the book, from title page to “Also by S.J. Varengo,” a total of exactly 630 printed pages.

When I clicked “save” and generated the finished PDF, I said, aloud, “I’m in the stretch!”

Then last night, while Kimmy was on the phone with her sister, I snuck into the office and finalized the cover. I’d already done the bulk of the design, but I gained about 10 pages of text in the editing process (I know, I know, editing is supposed to be a paring down to the essentials and the page count should decrease. I told you I’m a bad editor, and besides I always find better ways to say things during the drudge), and so I needed to reformat my gutter size. (I’m telling you, man, the things you have to worry about!) I also made two very minor changes to the back cover (reduced the font size on one section and added the front cover photo credit).

When I clicked “export” and generated the finished PDF of that, I thought “Holy [add your Robin-the-Boy-Wonder expletive here], I am definitely in the stretch now!” 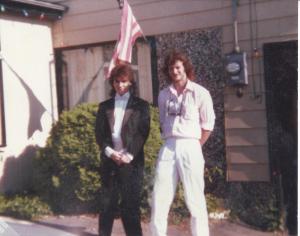 My brother on prom night, 100 years ago.

What remains? Uploading these two finished elements to the publisher, waiting for them to approve everything on their end and notify me of same, then one final check of the proof. Once I approve it, the book is done… finito… ready for human consumption.

All this means that I’ve finished ahead of deadline, and the book will, no ifs ands or buts, be released on Theodore C. Varengo’s 46th birthday.

And that is very good news.

One thought on “And They’re In The Stretch”