One of the things that sucks about having friends who are authors is that you have to read a lot. They’re always writing books, these people, and apparently they do so expecting that other people (a category into which I fall), are going to read these books.

One of the things that’s great about having friends who are authors is that you get to read a lot. My first paragraph may have led you to believe that I consider reading a chore. HA! Nothing could be further from the truth. Reading is such an important part of my life that I actively schedule the time to do it. I’m such an addict that I’m usually reading several books at the same time, (though I tend to concentrate upon two, max.)

That is the case now. I’m reading Invisible Man by Ralph Ellison, and a book by my friend, and second featured author from the mythical land of Iowa, Erik Therme.

Ok. I probably didn’t need to write his name twice in the space of a few millimeters of each other (oh, yeah, baby… we’re metric on this website), but when I wrote about Craig Hart, I gave him a nice fat headline, so I couldn’t very well not do it for Erik.

Erik has published three novels. They are, in order of publication from oldest to newest, Mortom, Resthaven, and Roam. He’s got his own website, and he also has a snappy author page on Amazon, and you could go to either of these resources and read all about his work, but then you won’t get my take, which is vastly superior to all other takes, as takes go.

Now before I talk about the work, I have to make a pair of full-disclosure-y statements.

#1. I haven’t known Erik that long. We met on Facebook. (You may remember in my post about Craig that we met on Twitter. I want to assure you that I do exist in real life, and am not a social-media-only entity.) I think he may have seen some of the obscenities, err, comments I wrote on some of Craig’s posts, and he also had (brilliantly) a book release event live on Facebook which I attended, leaving several more obscenities, DARN, I mean comments! One thing led to another and now we’re buds.

#2. I haven’t had time to read all of his books. I’m a doctor, Jim, not a computer. (Sorry, Star Trek moment). But I have delved deeply into his first book, Mortom.

One of the portions of Erik’s book drop party, (I said it that way because I’m totally hip-hop), was a free giveaway of something I did not win (no bitterness), based on the answer to the question “What is your favorite book and why?” Several people chose Mortom. I assumed at the time that they were just sucking up. Ok, I still believe that. I will go to my grave believing that.

But then I started reading it, and I have to say, it’s pretty damn good. It tells the story of a guy named Andrew who inherits a house from a guy named Craig, (no relation to our mutual author friend). Andrew likes to solve puzzles, and Craig left him a doozy. You may notice a rat on the key that is featured on the book’s cover. NOT A COINCIDENCE. That’s all I’m sayin’.

Mortom has too many things going on for me to tell you much in detail, without ruining it for you. If you’d like me to ruin it, contact me privately, but be forewarned, my ruination may be all lies. Just get it and read it and be done with it, already.

I don’t want to gloss over Resthaven, but in order to keep this post to no more than novella-length, let’s move on to his newest work, Roam 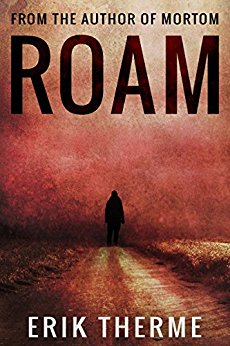 I haven’t started reading this book yet, but there’s already a ton of stuff I know about it, much garnered from the online book release, and much from Erik’s subsequent posts on FB. Here’s some of what I know:

Take this knowledge which I have imparted upon you and pop off to Amazon.com to buy all three of Erik’s books. You won’t regret it, and who knows. Maybe he’ll name a character after you in his next book!

I will now tell you a secret: If you click on either of the book cover images you will be transported magically to a wonderful land where you can actually purchase them for yourself. OK, it’s not magic, it’s just a hyperlink. Go ahead spoil everything.

One thought on “Friends: Entry #2”